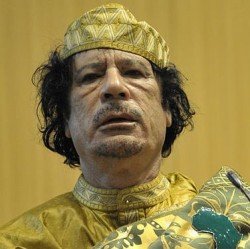 4 Lessons that Muammar Gadhafi Lifestyle can teach you

Though he was considered as an extremely bad ruler, yet he ruled the Libyans with great might and power, forcing the people to succumb to his wishes and oppressing them beyond they could ever imagine. Though he died a terrorist but there are some lessons to be learnt from him. Although this lesson might article might sound absurd at first but if you try to read through, you will know that there is a lot to learn about this guy called Gadhafi. I am not trying to capitalize on what he has done but am trying to bring out something that will really help us in the journey we all have to travel in this life. Bear in mind that every bad situation has something good to offer just like the African adage that says “out of the black pot, comes the white pap”

1. Never give up on your goal

He was determined to rule the Libyans more than they could ever imagine and this led to the riot that broke loose in the country. If he has given up when he was first confronted about his longevity on the throne, truly speaking there would have been no war in that country but his refusal led to the war. If we try to apply this principle on our race be become someone in life, we would be living a kind of life that we all wish to live. Some of us after confronting a little challenge in life just decide to give up on our dream without caring about what good is available for us in the future. Gadhafi died in his quest to rule longer than expected but if we all do little more effort in achieving that particular good thing we want to do in life, be rest assured that success is guaranteed.

2. Your Enemies Are More than Your Friend

Just as Robert Green said in his book “the 48 laws of power”, “if you don’t have any enemy, try to keep one because they will serve as a tormentor that will eventually help you achieve your goal”. The truth is that no matter what we aim to do in life “be it good or bad”, there is always a multiply enemies waiting for all mistake before they strike. Until Gadhafi refuses to agree to the demand of the citizens of Libya, he never knew that different countries were waiting to befall him. But after that, we all saw the consequence of what follows; as Americans are sending their soldiers, the French are sending there’s, Nigeria as well sent there’s and the opponent he has to face increase in an instant. Despite all this foes, he still pressed forward with his evil deeds. This should serve as a good lesson to all those that want to make it in life that the best time to pursue our dream is when all your enemies are gathered. This can easily be done by neglecting all this enemies and there tactics and face your own tactics. My brother and I usually played soccer manager at home and when we are to face each other, the journalist will ask question about the opposition tactics. Whenever my comment shows that am worried about his tactics, I will go ahead and loose that game but if I did not worry about his tactics, victory is guaranteed for me. So in life until we are at the verge of success, our enemies will always keep hiding but when success comes, they will always show their face. In such situation what to do is to worry less about them.

3. Always Prepare For the Future

Before he died (Gadhafi) he has stated the way he should be buried and where he should be buried. Without preparing for the future, we might not be able to cope with whatever life has for us in the future. To be able to face what this life has for us in the future, we have to prepare in earnest for what may come. Sometimes in life, things do not go the way we always expect but whenever we have this kind of situation, we should always try to cope with whatever come there after which may not be possible if we do not have a survival plan.

4. Remember To Accept Your Fate

Fate goes a long way in affecting our various life and we do not let fate takes its rightful place; we might not get what really belongs to us in life. Gadhafi accepted his fate though it is a bad one but he still accepted it. One thing we all should have in mind is that as long as our intentions in life is good and not evil, no evil can befall us and our fate will be a good one. It is by simply think of something good towards others and something good will come your way no matter where you are.