When the iPhone launched, it was revolutionary, and almost 5 years later, it’s successors are still going strong as the leaders of the market – in fact, the iPhone 4S sold more units than all the other models before it and the iPhone 5 is expected to fare even better. The same story with the iPad – both the first and the second models are practically doing whatever they want with the market, not minding the half a dozen other tablets that can actually compete with them (and several dozen other devices that can’t).

iOS is still on top, and the main reasons for that are that it’s simple to use and it has a lot of iphone apps on the marketplace. And while most of the popular iphone apps have already been ported over to other platforms, there are still many cool apps that are unique to iOS, and below I’ve made a list of the top ones: 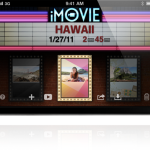 Created specifically for use on iPad 2 to show the power of its dual core processor, it’s a bit surprising that there is no alternative or clone of it on Android. If you have a Mac, you most probably know about the app – it basically allows you to shoot video then make edits right on your iPad’s display, by removing and inserting frames, adding special effects, filters and outputting the video in one of the supported formats or adding it to your favorite video and social media sites. 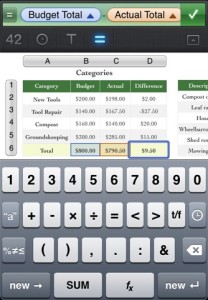 This is a very impressive set of apps for creating, viewing, making edits on your iPad or iPhone. In essence, it is Apple’s answer to Microsoft Office, only it’s more polished, simple to use and has some amazing graph and slide templates (typical of Apple, actually). The iOS version is almost as good as the desktop one, and there’s literally nothing on other platforms that can compare to Pages, Numbers or Keynote (the three apps in the Suite) functionality wise – they blow everything out of the water! 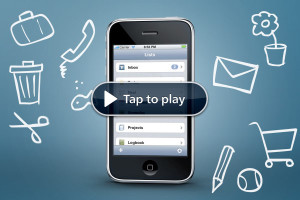 Things is widely recognized as the best schedule/task/To Do list manager for Mac OS X and iOS, and there’s really nothing that can compare with its ease of use, advanced functionality and nice interface on other platforms. You can plan your daily To Do list, use it for storing notes, set up reminders and filter everything by tags, categories and other things, even use it for managing small projects and much more – it’s the ultimate task manager for an iPad or iPhone, and for now it’s unique to Apple products. 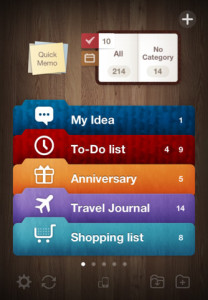 This app is really awesome, just as the name says. It’s basically a note taker, diary and task/To Do list manager – all in one. You’d think that it would be hard to combine all those things into one app and that separate apps would do the job better, but you’d be wrong in this case. Awesome Note is, well, awesome at all three things, and you can store photos, shopping lists, bookmarks and ideas, then create tasks based on them (or just new tasks), and everything is organized by categories in one intuitive and beautiful interface. To my knowledge, there’s nothing like this app for an Android and Windows Phone 7.

If you want a powerful pure diary/journal app, Momento is your best choice. This app lets you record any thoughts and moments whenever you want, then either store them on your mobile device or tablet privately, or share them on Twitter, YouTube, Facebook, Foursquare and many other sites. You can keep a diary, travel journal, project or research journal and many other types of frequently updated events, and everything can be tagged and easily searched, as well as safe thanks to the password protection. There are a lot of killer apps that you can only get for the iPhone and iPad (at least for now) on the marketplace, but the above ones caught my attention and I really think they’re worth checking out.