What are A/B Testing and Multivariate Testing? How do I implement them in my marketing? 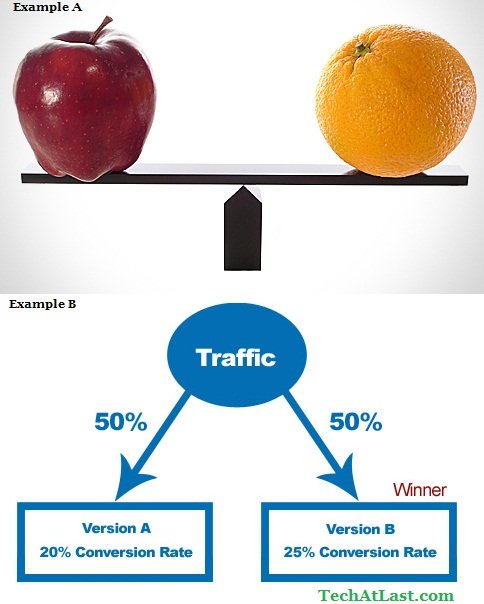 Ok, so you have a blog or an online store or some other form of website and it makes a little money, or maybe it makes a lot. Many of us in this position get fixated with trying to drive more traffic to our sites so we can keep growing our earnings. Whilst there is nothing wrong with this it’s worth remembering the simple equation of visitors multiplied by conversion rate (it’s not quite this simple as thing like basket size have an impact too) will go a long way to determining how much your site makes. Despite this many website owners focus nearly all of the time on traffic generation and none or very little on improving conversion rates.

What Is The Conversion Rate?

To raise the conversion rate, a website owner has to determine how he can change his site to persuade more visitors to complete a certain action. This action is the goal of the site, whether it is buying a product, ordering a service, signing up for a newsletter, taking a survey or some other action. It is possible to quantitatively test the site to discover precisely how these goals can be better met. Two popular methods are used to great effect when trying to take a site to the next level: A/B and multivariate testing.

A/B testing, also known as split testing, is the simpler method of the two. The site owner starts by focusing on a single element on one of his web pages. Items that can be tested may include images, headers, colors, text, footers, call-to-action buttons, graphics, size, position, layout and theme. A/B testing takes a single component and splits it into two variations. The first is left unchanged and used as a control. The second is changed in some way. Both versions are shown to an equal number of visitors simultaneously. Whichever version has the higher conversion rate wins.

Multivariate testing is much more sophisticated and has the potential to produce better results. This testing method is capable of taking several components, combining them into multiple variations and showing them all to visitors at once. This is far more accurate than A/B testing, since multivariate testing can conclusively demonstrate that a particular combination of variations is more popular with visitors. A/B testing, on the other hand, is limited by the fact that it focuses on one element at a time. Multivariate testing produces results that can be more readily verified as statistically significant.

The best way to create and implement both A/B and multivariate tests is to use a tool like Google Website Optimizer. The results from A/B testing are less readily verifiable than multivariate results, but a good testing tool will be able to come up with reliable indicators. Multivariate testing has well-defined conditions that can inhibit the testing results. A low traffic volume distorts the results, while high performance shifts between variations can also decrease their effectiveness. A low conversion rate, somewhat of a catch-22, also biases the results. The higher the rate and traffic volume, while having low performance changes, produces the most reliable results.

Given that Google’s Website Optimizer is free and easy to use there’s not good reason not to run A/B and multivariate tests for your site. It could be the easiest way to grow your site’s profitability. You can read up further on how multivariate testing works plus other forms of split testing.