After developing the top downloading mobile game, Angry Birds‘ developer extends business to soft drinks industry. The Angry Birds Soda was first launched in the home country Finland, and now, it’s like the tempo is gradually moving out and taking other markets.

If you an Angry Birds fan, everything is now available for you on T-shirts, posters, plush toys and phone cases, even some cake toppers new showcase the ego for the pig-popping game.

If you live outside Finland, Rovio has deprived you of a lot of fun, and that is the Angry Birds Soda. The soft drink has gained a successful patronage in the home country, became the best selling drinks as the report we got, even outselling Coke and Pepsi. 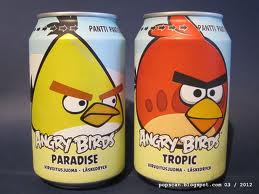 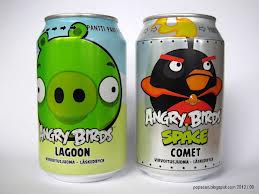 The company’s head, Peter Vesterbacka confirmed the Angry Birds Soda market expansion to The Next Web at the event of the BlackBerry 10 launch, where he was flagging the availability of Angry Birds Star Wars on the latest Blackberry’s platform.

The Rovio boss has not yet disclosed if the Angry Birds Soda will be coming to the U.S. and when, but he talked about the plan of launching the drinks market by market basis.

The news reporters were able to capture this statement from Vesterbacka “Right now, we are looking at the U.K., so that should happen over the next few months.” Rovio is presently seeking the right partners to distribute the Angry Birds Soda products at various markets; therefore, the launching goes from market to market. The startup sales in Russia were very encouraging, establishing how the Angry Birds brand works with varieties of products.

In 2012, Rovio ended the year with high figures, registering 263 million active monthly users in December. The company got over 1 billion downloads in that year, having 30 million during the Christmas week alone.

Are you looking out to continue the fun from your mobile console to your throat, Angry Birds Soda will quench your thirst.

Tell me if you eagerly expect this product in your country, I am available to hear you in the comment section below!