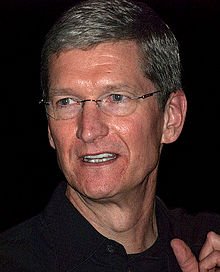 According to the report from Reuters and Yahoo, it says that the Calif-based technology giant, Apple’s CEO, Tim Cook has received a one-time stock award from the board of the company, the award is said to have worth nearly $400 million USD, and it is the largest price that was ever given by a company in a decade.

The company’s board of trustees granted Tim Cook one million restricted stock units (RSUs) in the company to signal its confidence in him. This move was taken in order to put confidence in him to do more than what his predecessor, Steve Jobs has done when he was still alive.

The company said in a Monday proxy filing that the stock award, half of which will last till 2016 and the remaining half in 2021, was said to have worth more than $376 million. When they compared to the closing price of Apple’s shares at exactly on August 24, 2011.

Aaron Boyd, who is the head of research team at Equilar – an executive compensation data firm, said:

“As far as a singular award, we haven’t seen anything this large in a long time,”

He said that another one and only one-time stock award in the history of the company that was worth more like that was the one they gave the formal Apple co-founder back then in 2000.

Boyd said that the 40 million price that was given to Steve Jobs then were valued at an amount that is more than $600 million at that time.

Steve Jobs, who was  dismissed from Apple in the mid-1980s, later returned to the Apple in 1997 and then went on to perform a wonderful job by transforming the company into world’s most valuable and respected technology company with a series of hit products which includes the iPhone, the iPod and the iPad.

Steve Jobs, who died last year october due to his battle with cancer, owned a 5.5 million percent of Apple shares, according to the filing.

Jobs, since the past three years has been receiving $1 a year in salary, according to the filing, while Tim Cook received a salary of about $900,000 last year alone.

Apple Inc. said that Tim Cook’s award was a retention and promotion tool for him, and as well as recognition for his efforts in running the company during the time Steve Jobs was absence due to his illness.

“The Board views his retention as CEO as critical to the Company’s success and smooth leadership transition. The RSU award is intended as a long-term retention incentive,” Apple said in its statement.

However, Apple shares closed on Monday’s regular trading session going down to 67 cents at $421.73, after it reached an all-time peak position of $427.75 earlier in the day.