Apple CEO Tim Cook, sent out an apology to customers over Apple Maps flaws, pointing out to rival’s product as alternatives

You know Apple for its clean and perfect products, always trying to avoid mistakes, and had never apologized for a product flaw, its first maps service, the Apple Maps has humbled the Cupertino based.

When Apple knocked Google Maps out of its platform, to replace with its own Apple Maps, many would have been expecting something big, that could even retire the Google Maps and set the whole world on a trail of locations, finally when it came on the newly released iOS, behold, the Apple Maps was a pile of rubbish, Google had already set a standard on map services.

Seriously, the Apple Maps could have made Apple lost some percentage of its market, but CEO Tim Cook, quickly came into the scene and apologizes, making people know that they are just starting, and admitting that the Apple Map was a mistake, he went to the extent of recommending rival’s product, Google Maps which was the default Map that had been accompanying iOS, since the day of inception. 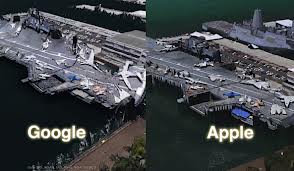 Since September 19, when the iOS 6 arrived along with September 21 when people started laying their hands on the iPhone 5 just to have a feel of what Apple had package that made so much noise while still in the making, people started making complaints about the Apple Maps service, every Apple customer had feel the Google Maps and had seen the quality Google had been offering, the newly introduced Apple Maps became a pile of rubbish as the general iOS customers were disappointed with general inaccuracy, lack of transit directions and mislabeled or non-existent cities and landmarks in the Apple Maps.

At first, the Cupertino based phone maker had been ignoring criticism and the only comment that was made over the issue last week was that this is ‘just the start’. But when the noise was so much, and they saw how this can affect the iPhone market, the Apple CEO had to do what Steve Job never did in his life time, “making public apology for a product”. Steve Job will never allow product ship whenever there is an obvious inaccuracy.

In the letter issued out by Cook, he mentioned that the Google Maps was the first map ever to be featured on the iOS, but, as time goes, they had wanted to offer people a better Map service that includes the turn-by-turn directions, flyover, vector-based maps and voice integration.

To make up for this slight error, Cook suggested various alternatives for the Apple Maps, such as Waze, Bing, Nokia and Google maps.

At Apple, we strive to make world-class products that deliver the best experience possible to our customers. With the launch of our new Maps last week, we fell short on this commitment. We are extremely sorry for the frustration this has caused our customers and we are doing everything we can to make Maps better.

We launched Maps initially with the first version of iOS. As time progressed, we wanted to provide our customers with even better Maps including features such as turn-by-turn directions, voice integration, Flyover and vector-based maps. In order to do this, we had to create a new version of Maps from the ground up.

There are already more than 100 million iOS devices use the new Apple Maps, with more and more joining us every day. In just over a week, iOS users with the new Maps have already searched for nearly half a billion locations. The more our customers use our Maps the better it will get and we greatly appreciate all of the feedback we have received from you.

While we’re improving Maps, you can try alternatives by downloading map apps from the App Store like Bing, MapQuest and Waze, or use Google or Nokia maps by going to their websites and creating an icon on your home screen to their web app.

Everything we do at Apple is aimed at making our products the best in the world. We know that you expect that from us, and we will keep working non-stop until Maps lives up to the same incredibly high standard.