Apple has removed the fake jailbreak app which was being sold for $9.99 at the App Store. If you really see the app, you will think it is truly a nice app that was made for the task and signed by Apple but it was a game. The app is not a real “Jailbreak” app which will make it easy for iphone users to jailbreak any iDevices running on all iOS firmware version due to its description in the store.

Majority of iPhone users who purchased and installed the app on their devices were fully disappointed and annoyed about it because the app had nothing to do with jailbreaking at all. 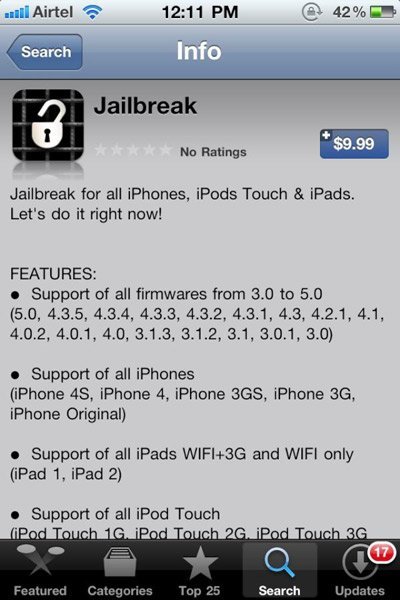 Apple, after some series of complaints from users, took an action to remove the app from the Store.

ALSO READ: How to Upgrade to iOS 5 Now – Step by Step Guide

However, it is advisable for you not to purchase any jailbreak tool from any website because this app is always free and it will still continue to be as long as the developer still wants it. You should know that all the hackers and some other developers who contributed to jailbreak were doing it for free and for the fun of it. And even, some of  them who even asks for donation does so not because they want to get paid for the workdone but for the purpose of continuing the research and others.

This should show us that the automated approval of apps and games in the App Store needs to be look into because most of the people that handles the approval process might even not know anything about the app they’re approving.

So, be wary of any websites that are trying to sell jailbreak app for the sake of making some gain from doing it. Jailbreak app is free! Thanks for reading