How To Convert Your Windows 7 To Windows 8 User Interface 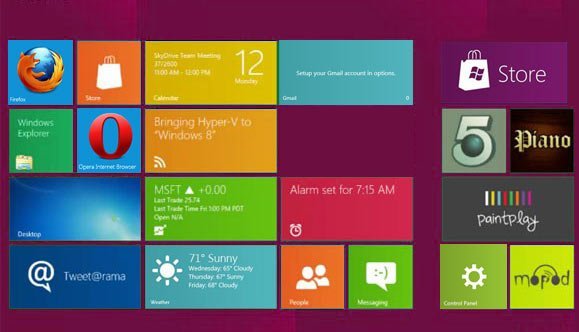 Since Windows 8 is yet to be released, though, there are computers out there which has featured this OS on at the recently concluded Consumer Electronics Show in Las Vegas, USA., many windows OS users are still in haste to use this new environment on their PC’s. Likewise, I’m expecting the new interface since the Windows 7 is more or less of a repetition of the Windows Vista OS, so I don’t see any new thing in it.

Bring on the Windows 8, Microsoft! That was the message from all Windows OS users. But before that time arrives, let me show you a trick to help you change your current windows 7 environment into Windows 8 version.

So, now you can experience windows 8 beta version free on your Windows 7 computer. Though, the experience won’t be as the original windows 8 as at this moment because this one does not come with a touch screen feature.

The metro 7 app will help you converts your Windows 7 UI (user interface) to Windows 8 with perfect look ability. Now let us see how to do it

Before you do anything, you must first download the Metro 7 application and install it you’re your computer.
Then download the .Net Framework 4.0 if you don’t have one already into your PC and easily install it.

Once it is done, you can then use it to customize your PC’s look by configuring the software’s settings.
With the application running on your computer, you can easily surf and use different tiles provided with the app on your desktop just by scrolling and dragging with your computer mouse.

It will surely give you a new experience of Windows OS once it is successfully installed and configured.

You must know that this app doesn’t belong by patent to Microsoft Inc. and also, it is still in beta mode, so the final product would somehow be different from this one. This new product has some flaws which come with it presently, but you can enjoy keeps on enjoying the new interface till the official launch of Windows 8 – which is coming soonest. Recently, we published an article on free android apps for windows based phones and android users and also an article on iPhone developer program. Kindly read it