The International Consumer Electronics Show that was help in Las Vegas is all about the latest smart phones, tablet PC and other devices. But what about the old gadgets? Don’t they get any love?

At the event there was a gadget that was made mainly for recycling of gadgets and that means, old phone will now have a fitting home at the end.

The gadget works in amazing way by just dropping your phone into the EcoATM, and the gadget will pay you the exact price that your handset is worth. The cupboard sized machine has a large touchscreen and a big metal mouth where you can place you phones (old phones) or MP3 player. It takes pictures of the device you inserted into it and figure out its shape and it has a cable that will connect to your phone to confirm it is working and then  it will give you the exact price of your device. 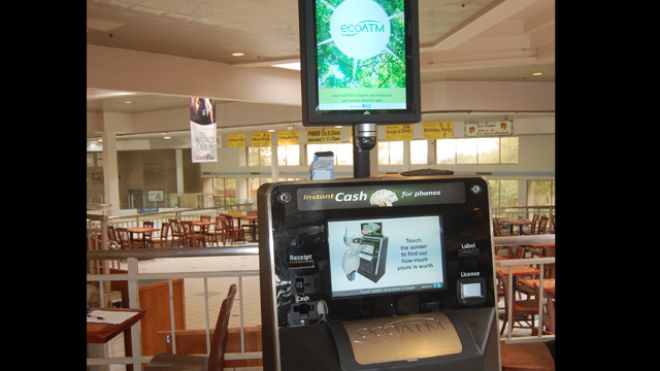 Once it finalizes its analysis, it will give you the quote of your device on that same spot based on the amount the networks of electronics recycling companies are willing to pay for such. If you accept the price, it will splits out the cash. In an interview by EcoATM founder Bill Bowles, he says:

An older phone might not be worth reselling, but the machine will take it anyway, and give you a dollar. The company will melt down the phone in an environmentally friendly fashion to extract the precious metals from it.

WHY IT’S HOT: It’s tough to recycle old electronics. Collection bins are few and far between, though some electronics stores accept items for recycling. You can sell newer phones on eBay, but it’s a bit of a hassle.

THE UPSHOT: A fast way to deal with old electronics that keeps your conscience clean and might give you a bit of extra money.

THE DOWNSIDE: The EcoATM’s quote probably won’t match what you can get for your item on eBay. On the other hand, you avoid eBay’s seller fees. You have to physically go to the ATM. It’s a big machine, about twice the size of a regular drugstore ATM. It has a lot of complicated moving parts, and could be prone to breakage.

AVAILABILITY: There are about fifty of them deployed right now, mostly in grocery stores and malls in California. The San Diego-based company behind the machine says it plans to have about 500 out at the end of this year, spreading eastward. Fox News