Five SEO Trends for 2012 that may change your Online world 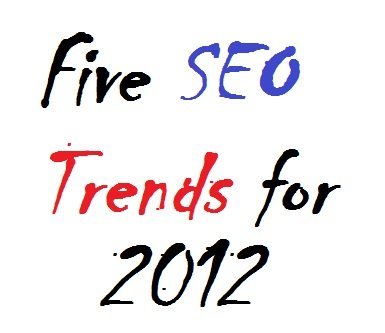 A few months ago, I met a guy who runs several websites selling sheds. He was a genius, with high-ranking websites that were built to convert. I found myself agreeing with everything – except one thing: Google’s algorithm has not changed in the last ten years, and it probably never will.

For someone with so many page 1 listings, it’s hard to argue. However, I see SEO changing in so many ways. While I don’t see 2012 as a year of huge change, there are trends that are set to become fact – or disappear altogether. In this post, I look at five stand-out SEO trends for 2012, and whether they’ll sink or swim.

1) The devaluation of anchor text Thank you, spammers.

The thousands of Indian “SEO” companies that besmirch the good name of SEO consultants worldwide (and those of good Indian SEO consultants, I must add) have contributed to the devaluation of anchor text as a whole.

I foresee the continued devaluation of anchor text to such an extent that Google is now looking at quality more than ever. Panda put pay to a lot of the poor content, and comment spam is surely a thing of the past. Even private blog networks are devaluing the very nature of blogs by producing unreadable spun content that provides users with a poor experience simply to give someone a ‘contextual link’.

So how do you approach link-building now, given the appalling spam methods meted out by unscrupulous ‘SEOs’?

I don’t think anchor text is entirely dead – it will always remain a relevant signal to the search engines – but it must go hand-in-hand with the surrounding text and the subject or niche of the website. For example, if you are building links to a hotel, don’t waste your time writing a blog post for a private blog network which will post your links to sites with names like creditcards4u.biz. Work for your links instead, get to know people, mix up anchor text and use the plain URL, and you will be rewarded. I’m already seeing number 1 positions in competitive niches for sites with no anchor text links.

2) The overvaluation of Google+ Perhaps one day, ‘real people’ will start using Google+.

In fact, it’s a likelihood given that Google is intent on pushing its own service up the rankings to the detriment of content that people have been working on for many years.

I have one particular client whose own pages have been pushed down the SERPs in favour of her new Google+ page, which was a week old at the time. Does this provide anything of value to the user? Not particularly, as the G+ business page was practically empty.

It does, however, provide some practical use to SEO professionals, from rich snippets in the SERPs to backlinks galore. While most of us are on Facebook and Twitter, Google is unable to index most of that content. Therefore, until they release that data, G+ will work its way inexorably into our rankings whether we like it or not. Whether that increases uptake remains to be seen, but for now, all businesses need a Google+ strategy, and they need one now.

Rich Snippets will become mainstream Rich Snippets are the little bits of mark-up that can change your meta description display in the search engine rankings. Schema.org has been around for a while – and Google+ itself automatically uses rich snippets to put your author profile (and photo) into the SERPs snippet whenever it can.

However, right now, it’s under-used, which means it’s the perfect time to get in there. You can visit schema.org and find out more about which rich snippets are relevant to your website, mark up your site appropriately, and influence the display of the results page.

What does this actually mean? Well, if about 5% of people usually click the number 4 result on page 1, you may be able to push that up to 8% with something that catches the eye, and subsequently, the attention. Incremental little changes like that, on competitive keywords, can make all the difference – and no back-link building involved.

4) The words ‘social media’ will die out.

I’ve been banking on this one for some time, and I’m hoping that by 2012, the great big con act that is ‘social media’ will die off forever.

That’s not to say that Facebook, Twitter, Digg, Stumbleupon and all those other sites will die off forever, but they will be considered as part of an overall marketing mix, and not as some separate sphere which requires ‘social media consultants’ and (god forbid) ‘social media gurus’ who can peddle their wares at exorbitant prices.

In fact, if anything, this will be the year that SEOs reclaim social media from the ‘social media experts’. Instead of ‘tweeting’, they’ll be cultivating relationships; instead of asking for Facebook ‘likes’, they’ll be building communities and working that into the overall process of improving a website’s traffic and performance.

5) Mobile finally takes a proper chunk of your web traffic It depends very much on your niche.

Clearly B2B websites will be visited by Internet Explorer 6.0 users on 10-year-old Dell laptops and require hacks galore, as well as rapid page-load time. But mobile traffic is creeping up on everyone like the elephant in the room. We all know it’s there, we’ve just been ignoring it for years.

This should be the year SEOs realise that segmented approaches are required, with tablets, notebooks and smartphones requiring different tactics. While developing an App is still a costly – and complex option – developing a smartphone-friendly website doesn’t have to be, with WordPress themes and plugins available for next to nothing (or nothing).

Eventually, SEOs will have to consider Siri as well as the voice search option on Google+, and how their websites respond to the more immediate demands of voice-activated search.

So SEO is always changing – and the search engines are always devaluing the work of the spammers, meaning that our previously ethical tactics must develop. In a way, that’s what makes SEO so interesting – that it’s never the same. Even if you sell sheds.