Google, the popular search provider who recently made a move that surprised many bloggers with its closure of Google Adsense for Domain for publishers, has also released an update for its social networking site app, the Google+ iOS App for the iOS-based smartphone users.

In the new and latest updated version of the app, the new thing that we can easily notice in it is the Instant Upload feature. That option will help bloggers and poster to automatically upload all of their photos and videos to a Google+ private album from where they can easily view and share them with their friends, circles and the rest of the world.

This feature is only useful when the Google+ iOS app is in active mode, it can’t work when the app is disable or not in use, though it can still work in some moments after closing it.

When the app is closed, all your  current uploads will still be there even if it doesn’t finish before you close and it will continue from there when you open the app again. 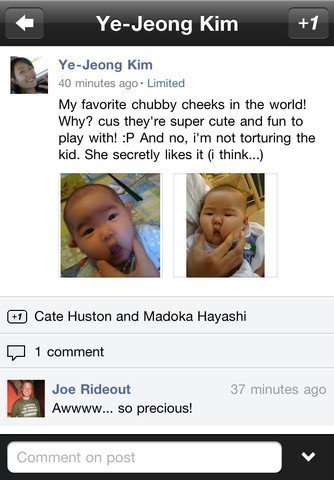 Google Plus (+1) app for iOS-based devices gets update

In the meantime,  a new “What’s Hot” stream has been added to the Google+ app. Apart from that one, there is also a feature that would help you send feedback to Google+ team when you shake your phone without stress in order to improve user experience.

Not all, the new version also come with some solution to few of the Google+ app for iOS bugs with updated fixes and performance improvements.

Now is the time for you to update your Google+ app right from the AppStore. But if you don’t have this app already on your phone; be it iPhone, iPad, iPod Touch, all you have to do is to grab the direct download link from the link below and get the Google+ App running on your phone with its new Instant Upload feature 🙂