Google has unveiled its much-anticipated digital music storing store on Wednesday, stepping up the competition against its rivals, Amazon and Apple. The new service, Google Music features millions of songs from several record labels EMI, Universal, Sony Music  and several other smaller labels, but it doesn’t have access to Warner Music Group’s catalog yet. The reason behind this was because of the terms regarding the pricing and the anti-piracy measures which the two failed to reach an agreement on. 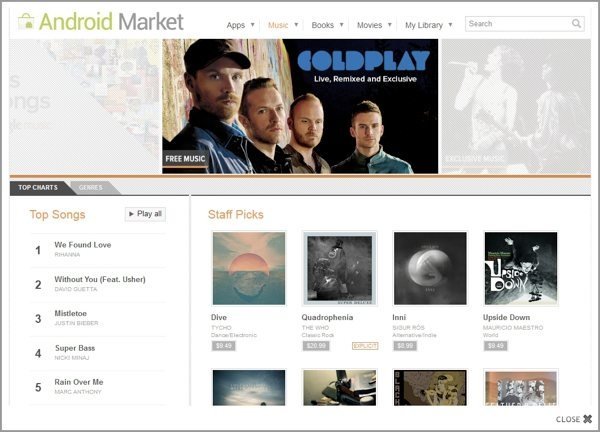 Users of this service will be able to buy songs via the Android Market, with low rates of tracks cost ranging somewhere between $0.69 and $1.29.

Google in order to help the service stay better and become stronger, said that, it would offer free song for customers to be downloading every day while allowing them to share their purchased songs to their loved ones on the Google+ platform.

The search engine giant continues by stating that the Google Music service has now graduated from its beta testing period and now becomes available for public registration in the United States.

Apple on the other hand charges $25 per annum for uploading and storing of up to 25,000 songs that are not purchased through its sister service, iTunes, while Amazon on the other hand, offers unlimited cloud music storage (plus additional 20GB spaces for other files) for a $20 yearly fee.

Unlike Apple iTunes Match, songs stored on the Google Music online storage locker can be easily streamed to any other device via any 3G, 4G and a Wi-Fi access. Another benefit of the Google Music service is that, it stores the songs you have recently played in your cache so they are still available in case you lose your internet connection. You can also ‘pin’ the songs, albums or artists that you want to only make available offline.

The new service will no doubt help Google Inc. promote its Android smartphone operating system and android marketplace, but it’s not exclusive to the company’s mobile platform. It will be available through the Music app on Android 2.2 and up, a Music Manager desktop app for Mac OS X, Linux, and Windows, and an HTML5 mobile Web app that can be accessed on virtually any device by visiting music.google.com using a mobile browser.
[TechSpot]