GPS Brogue Shoes, navigating you to your destination

GPS the acronym for Global positioning System is a satellite navigation system based in space, the system provides location and time information for all weather, anywhere or near the Earth, where you have a non obstructed line of sight to four or more GPS satellites. The GPS is run and maintained by the US government and it is free to access to everyone who has a GPS receiver such as the GPS Brogue Shoes this post is about.

The GPS was created by the US Department of Defense as part of technological advancement for its security service, but later made available for civilian use.

The GPS can help you locate your destination, it shows direction on which way you should thread according to the destination command you have set on it.

It is no longer news that most smartphone are incorporated with GPS technology, so that you can make a easy navigation using your device. Now, technology has gone a little ahead, imagine telling your shoe your destination, you know you can never get lost; it takes you directly to where you are going. 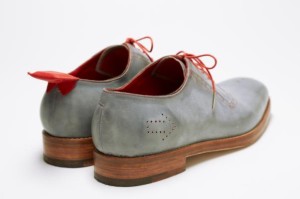 A British designer Dominic Wilcox came proposed a concept and that is the GPS Brogue Shoe. The concept follows uploading your destination to the shoes and helps them light the right part for you.

The GPS Brogue shoes are incorporated with the GPS sensor on the heel of the left shoe, and once the two heels is clicked together, the sensor will be activated. Destination can be uploaded with a laptop via the USB, once the sensor has your destination, it will signal the LEDs on the side of the left shoe to show the way you have to go.

Your journey progress status can also be viewed on the status bar on the right shoe. The bar has red LEDs and progresses as you move closer to your destination.

As Wilcox said, “I hope my GPS shoes will reconnect people to the craftsmanship inherent in shoe-making, but also stretch the boundaries of potential for the industry.” This is still a concept, lest you go to the market looking out for GPS shoes. This concept will be very cool and useful anyway.