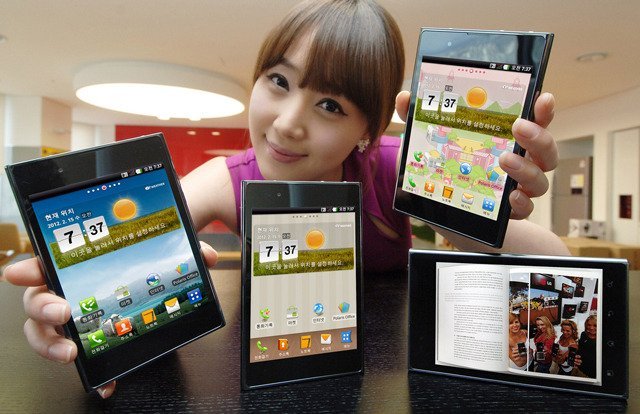 The LG Optimus Vu was displayed at the MWC in February and caused some ripples within the mobile phone world due to its unique dimensions — people were arguing whether it is actually a phone or a tablet. Potentially challenging the similar Samsung Galaxy Note, we decided to take a closer look at the device in order to see whether it will take off on the UK market or not.

The South Korean mobile phone giant LG has released this phone with clear intentions, as can be seen within the name of this phone, the “Vu”, which displays the emphasis this phone plays upon the entertainment and display factor of the phone. The primary way that this phone sets itself apart is linked to this, through the screen that sets its dimensions at 4:3. This creates a very square looking phone, which would suggest that the phone is bulky (especially if compared to the rival Samsung Galaxy Note — see the video below), but its ultra thin profile makes up for this at just 8.5mm that makes this phone one of the slimmest around. The size of the screen stands at five inches, which combined with the screens dimensions makes the phone ideal for entertainment purposes.

However, the problem with this is that the phone is not the easiest to hold, and navigating and using the phone is definitely a two hand job. Those who like to use their phone whilst walking or standing on public transport may find this phone difficult to use, due to the lack of ability to have the phone nicely sitting in one palm. Visually, the phone is appealing, with smart features combined with a nicely textured rear cover to the phone, with only one small logo and camera lens elsewhere on the back. Added to the exterior of the phone is a stylus that is easily accessible, and makes the phone a lot easier to use and ideal for those who require drawing ability on the phone.

Inside the phone, the hardware impresses. The 1.5GHz dual-core processor makes the phone run extremely smoothly, and whilst not up to the quad core phones we’ve seen on the market recently, still is sufficient for this phone. Multiple apps and entertainment features run perfectly well with this processing speed. The phone also holds a fairly standard but good sized 1GB of RAM, which is also sufficient in making the phone run well. 32 gigabites of internal storage is also enough for this phone, although there are no expandable memory ports on the phone, which limits the device for those who require a larger amount of storage. However, most users will find the 32MB to be enough.

Then we come to what is probably the best piece of hardware on the phone, which is the 8 megapixel camera. This camera provides extremely good photo quality that the screen is perfect for viewing. When we tested the camera abilities, we were very impressed, due to its sharp qualities and ability to take good quality photographs in poor light. The front facing 1.3 megapixel camera also proves up to the challenge, providing great conference calling potentials for this phone.

The phone runs Android Gingerbread, which disappoints us. We would have expected Android 4.0 for this phone, but instead we are left with the older Android operating system that does little to excite us. The system runs fine however, and its saving grace is that the wide aspect ratio of the screen makes the phone unique in its navigation. Android 4.0 wouldn’t particularly add to the entertainment features, which can still easily be enjoyed on this phone. We were able to stream video on the phone via Wi-Fi which was very easily viewable and smooth due to the good quality processor.

The battery quality on the phone is good, but limited to an extent due to the high processor speeds and potentially having been decreased to make it slim enough to fit within the thin profile of the phone. In order to charge the phone, the device is placed within a docking station, which provides a prop that can mean that video can be watched hands free. However, the charger can also be detached making the docking station not essential, which makes the charger more transportable. 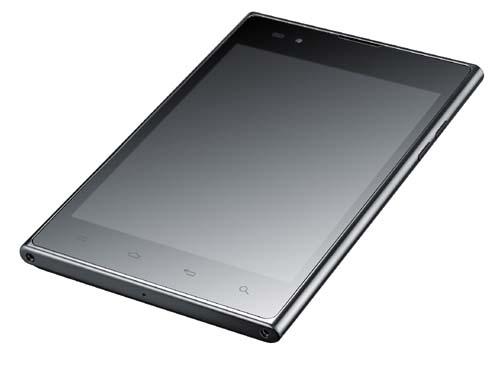 In conclusion, this phone will gain both lovers and haters due to its dimensions. Like all phones of a unique nature, we don’t expect it to make a massive mark in the UK. That’s not to say that this isn’t a bad phone, however. Such experiments with phones are beneficial to the overall market, and will please many phone users that the format which this phone takes will appeal to. We will not be expecting to see school kids walking down the road with this item, but the occasional entertainment loving businessman may wish to invest in this, which may result in us seeing this in a few offices soon. The video conferences capabilities of this phone are great, which may add to that factor, with the docking station providing a great opportunity to bring video conferencing further into the business world in the UK.

The biggest problem that the phone may face however is its astronomical mark up price it went on sale in Korea for, at $900 USD. In reality, how many people will be willing to fork out such a sum? The release date for the UK still hasn’t been confirmed, but when it does we will be looking with anticipation at whether this phone makes any dent in the market at all. And before that, you can have a look at the hands-on video below:

Amelia
Amelia is from Rightmobilephone, which offers the best deals on LG phones at the moment. She's also interested in video games, sports and healthy lifestyle.