The Consumer Electronics Show (CES 2012) is coming soon and there are lots of surprises that may happen during the event – and one of the companies that may springs up surprises is LG. LG has shown us that we can be expecting a lot from them come next year at the LG Stall.

LG will be showcasing its world’s acclaimed largest OLED TV with 55 inches in size and it is believed that it is going to be the centre of attraction at the event.

The OLED TV display panel “uses an oxide thin-film transistor instead of the usual low-temperature polysilicon from smaller OLED screens.” This reduces the cost of producing it and also helps in reducing the selling price for the device – and it also help the company provide a real display that appeals to users. 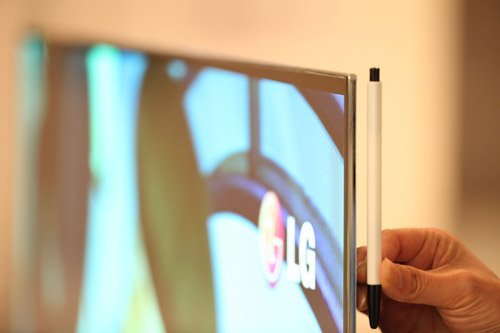 According to statement from Electronista, it reads: “LG claims an “Ultra Definition” panel and is using white OLED, which is both clearer and more efficient than on most such displays.” Additionally, the TV comes with mostly all the features of the OLED display and thereby making it easy for people to consider it.

About the size of the TV, it is one of the slimmest TV ever made sharing the same size with the world acclaimed slimmest phones like Droiz RAZR at 5mm (just 0.2 inch of size) . The display screen of the TV is also thin.

For all this features, it makes the TV  a lot lighter in weight than any other TV in market and thereby making it the user’s choice because everyone would love to have a lighter television at home than those heavy ones that we’ve had for ages now – it is even the lightest TV among other LCD TV‘s. And that makes it easier for designers in creating different stands and accessories for it.

Also the OEM design of this LG’s TV is cool and elegant when compared to other TV’s and it will even turn your living room to earthly – heaven.

About price for the gadget, there isn’t any news or confirmed report about its actual price yet but we’ll update you as soon as it reached us anytime from now.