At a point, Apple became innovative, and introduced a voice assistant to its iPhone, which it named Siri. Siri has been pulling grounds for years, before Samsung came out with its S-Voice; the S-Voice was not as hot as Siri. Android users had been long awaiting voice command assistance on their device; at last, something wonderful is now in town, thanks to Maluuba.

The author of the Voice assistant command used a slogan on their blog, which says “Maluuba is the ‘do-engine’ that understands you”

Maluuba is a natural search helper that brings to you what exactly you want, helps you arrange life, and allows you share fascinating outcomes with your peeps. No more cracking of brains for keywords to do a search, no more confusion on which application to employ, just open your mouth and talk to Maluuba, and you will instantly get what you want.

Maluuba understands your natural intonations, and transcribes them into relevant geographical results that you can organize and share to help your daily schedules, speak your mind, naturally the way you would to your friend, Maluuba will respond to your call.

In case you get bored of natural voice; Maluuba is also available for touch, just to serve you better. 18 different domains are currently supported by Maluuba, and they includes; Movies, Weather, Businesses, Events etc.

When you sought for an active Siri competitor on Android, Maluuba is definitely the answer to this call. Unlike the Siri, Maluuba is tied to many third party services. Maluuba works like the Siri, it enables you to set alarms, meetings and reminders that it location based, this app works hand in hand with the Google calendar account.

Sam Pasupalak, co-founder of the company told Frederic Lardinois of TechCrunch in early September that Maluuba is never ashamed of being compared to Siri, he continued saying Maluuba makes it a point of duty to ensure that you easily find what you want. 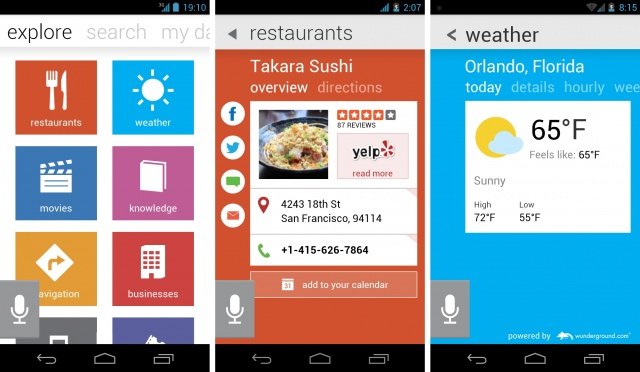 Pasupalak is impressed so much on how quick his team is able to connect to 18 different domains that includes, movies, restaurants as well as general knowledge questions etc. like Siri are powered by Wolfram. Some of the APIs using these services includes; Facebook, Twitter, Rotten Tomatoes, Eventful, Yelp, West World Media (movies), Google calendar, Wikipedia and Weather Underground.

Examples of simple questions that can be answered by Maluuba are; I’d like to watch a romantic movie with my girlfriend. Where can I practice Yoga? I’m really craving for some Sushi? Is today a good day to go hiking? How much is kindle Fire? What’s happening this weekend at Montreal?

TechCrunch, Frederic Lardinois was able to test a preview version of Maluuba early in the Month, and he found the application so impressive. You don’t need specific keywords before you are able to use Maluuba and it will easily give answers to your query.

The Waterloo Canada based Maluuba Company got a series A investment in February from Samsung, showing that Samsung is definitely coming up with Maluuba on its future devices. Pasupalak said, many Android OEMs has been invited, and in six months, many of the Android devices will be live on Maluuba, this service is being pressed to come into smart TVs as the Co-founder informed.

Maluuba is planning to fish its revenue from these partnerships, and also from its API licensing, also from third party providers for services such as instant restaurant reservations. The deals are affiliate for now, but the company plans to further move into direct payment system to its partners so that it will be able to for example, offer an instant movie ticketing purchase.

The Maluuba team research project started back on 2010, currently, the company is running 22 employees and the app is focused on Android, but promises to come to iOS and Windows Phone in few months for they are already being developed.