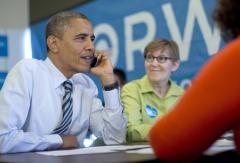 Technology is a weapon, a force multiplier as the military will say it. So is the vehicle that drove the Obama’s campaign to a land of success.

The presidential contestants in the just concluded US election judiciously tapped into data archives like never before to communicate to prospective voters. But what gave Obama the upper hand in his campaign is the utilization of mobile and online technology to route his much know how to play game seeking potential supporters and pleading with them to cast their vote, by phone or by person, says the two among the senior members in the Technology team in Obama’s campaign, Chief Integration and Innovation Officer of the Obama’s campaign, Mr Micheal Slaby and Chief Technology Officer for the Obama’s campaign, Mr. Harper Reed.

They established a program called “Dashboard”, and urges volunteers to join a local team in a field and remotely get assignments. The dashboard was a web application enabled for tablets and smartphones showing where field workers are located, locality to work on and blocks where assistance is needed. Mr Slaby said people are enabled to join neighborhood team without visiting the central office.

Read: Obama to Start Tweeting From His Twitter @BarackObama

Other unique program was a telephony campaign to people at home instead of travelling for a campaign; they just worked from a telephone centre. Reed said they used a web program that allows people register call and to receive a compiled list of phone numbers, script to use and names.

It was designed such that the volunteer callers and those they called have similar profiles. Those who were called had similar life experiences with those who called them. It is done this way for them to get their audience persuaded to vote for Obama. A case study was that of a World War II Veteran, 91 years old man, who volunteered as an Obama phone corps.

Mr Salby said the number of Obama’s campaign callers for this year is a multiple of ten from the volunteers of 2008.

One more thing that helped was the new development in the internet world, the cloud computing hardly existed in 2008.

The Obama’s campaign engineers didn’t use commercial software; instead, they utilized open source software along with the Amazon service.