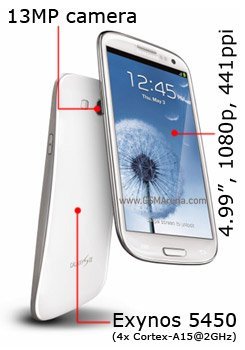 Although no picture of any kind yet to show how the model looks like, but most of the specs to be featured on the Galaxy S III successor has been mentioned according to the rumor.

Samsung will be making a 5.0 inches Super AMOLED capacitive touchscreen display of pixel density ~441 with a resolution of 1080 x 1920 on the Samsung Galaxy S IV; it will bring a 16M colors and features TouchWiz UI. Talking about the storage department, the Samsung Galaxy S IV smartphone will be featuring up to 64 GB with a 2GB RAM. It will be running on the Android 4.2 Jelly Bean Operating System and expected to get powered by Exynos 5450 Quad core Cortex A-15 processor that clocks 2 GHz.

As the development goes for the rumored Samsung Galaxy S IV, we will began to bring you image and video mockups, as well as other specs as they will be leaking till debut.

Begin to save up for the Samsung Galaxy S IV, I guess a little higher budget than the its predecessor.