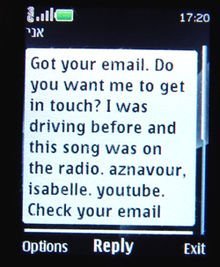 According to an article on Wikipedia, the first SMS text message was sent in United Kingdom on Dec. 3, 1992 over a Vodafone GSM network by a man called Neil Papworth by name, by using his personal computer to connect to Vodafone’s Richard Jarvis using an Orbitel 901 handset.

The content of the text message reads “Merry Christmas”.

However, the technology that was behind the Short Message Service, known as SMS is now 27-years old, because it has first been developed in a Franco-German GSM cooperation back then in 1984 by Bernard Ghillebaert and Friedhelm Hillebrand. And it was eight years after the experiment that the message was able to be sent with the Merry Christmas message.

And right from that time, the SMS technology has come a long way to dominate the mobile messaging scene. Meanwhile, last year, the SMS texts produced about $114.6 billion in revenues worldwide, while many experts still believes that it’s just a tip of an iceberg. Estimation by some experts shows that mobile networks will earn up to $726 billion from the SMS text messaging alone over the next five years to come.

Also, this time when bigger company like Apple is encouraging users to continue using its messaging app, iMessage or when smartphone apps like GroupMe is making sure they are able to cut the best side of the cake. It now shows that the SMS isn’t ready to give up its throne of mobile messaging anytime soon.