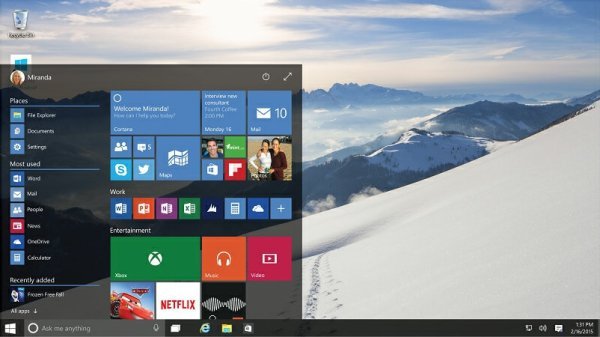 Microsoft Inc is set to release its latest Windows OS; Windows 10 sometimes next month precisely July 29. An upgrade latest to the Windows 8.1

Windows 10 has been designed to run on numerous form factors including; desktops, tablets, phones, convertible devices, the Xbox One, holographic headsets, Internet device stuffs and barebones computers such as the Raspberry Pi.

The new OS will run on all this devices taking only the user Interface (UI) as the difference.

One Windows 10 app across devices

Phones and Xbox One may not run legacy apps, but Microsoft has built the universal apps concept.

Even though the UI and hardware may be different for desktops, Xbox One, phone, Raspberry Pi, Microsoft has created a platform whereby developers can build one apps to run across all devices.

Microsoft showed off an example of this concept with its Outlook, Photos and Office universal app running on both phone and desktop during the previews. The universal app will change and reshape depending on the UI and input methods.

Another example Microsoft showed off is a news app featuring multimedia and articles on desktop and mobile, but revealing only video on Xbox One.

This is a really big ambition for Microsoft on the Windows 10 although the universal app game for them is a little late but finally developers have a reason to develop for the Windows OS.

Key Features of the Windows 10

Microsoft has completely transformed the start menu on the Windows 10 OS; it is no longer full size like that of the Windows 8.1, the Windows Store apps is now embedded in the menu in form of live tiles.

Cortana is Microsoft’s new voice assistant that serves up information via text or voice. This is already a hit on the Windows Phone, but Microsoft has promised its launch for iOS and Android users.

Seem the Internet explorer is finally changing name, Microsoft Edge will be the substitute. Even at the beta, the browser is slick already, it has an offline reading mode, has ability to quickly make annotations, also Chrome/Firefox extensions are compatible.

If you use a convertible laptop or tablet, the Continuum mode dynamically adjusts your UI once you are changing from the laptop to tablet mode or vice versa.

The continuum mode on Windows 10 Phone is the most impressive; it will change to Windows 10 desktop style and scale up apps anytime you connect the phone to a TV.

Microsoft has brief up security with the new Windows Hello, the feature offers biometric authentication in form of iris scanning or fingerprint reading anytime you are trying to login into the platform. This should make your device safer.

Direct X 12: The Direct X 12 support will squeeze even more performance out of existing hardware.

System Requirement for the Windows 10

If you have a Windows Phone 8.1 device, you can easily upgrade to Windows 10 once it out.

You can reserve your copy via the Windows icon on your system tray in the bottom-right corner or simply visit Microsoft’s Windows 10 Upgrade page for more information.