Android smartphone and tablet owners are almost worried when they noticed that their devices may be carrying an app that’s responsible  for tracking every details of dropped calls and some other useful information. But now, there’s a solution to that now as Lookout Mobile Security just released a newly made app which is capable of scanning of all android based smartphones and others whether the conflicting app, Carrier IQ is there or not. 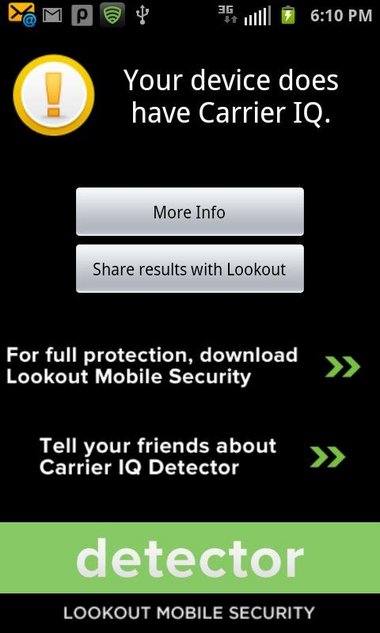 The new app just being developed by Lookout Mobile Security is a free Android app called Carrier IQ Detector. It was designed to help consumers detect Carrier IQ mobile diagnostic software if present on the phone, the app has raised many concerns to many users which has lit up several security flags recently as the possible logger of phone user  and valuable location information.

However, Carrier IQ denies that allegations and then claims that the software is just there for major wireless carriers like AT&T, T-Mobile and Sprint to improve their service and the network performance. The good news is that the Lookout app is now available to be downloaded from the Android Market.

This is what Lookout said about the app in its description:

“Security researchers recently determined that a number of consumer mobile devices contain pre-installed software from Carrier IQ. While this software appears to be designed to help mobile network operators improve coverage through metrics tracking, it does not offer a clear opt-out path for users. Also, it can be difficult for non-technical users to know whether their handset is affected. We’ve developed the Carrier IQ Detector to aid in this process to keep mobile users fully informed about what their phone is doing.”

But, is that the last removal?

Not really, this app isn’t an app that will help you remove the software from your phone but this app will just help you know if you have it on your device, that is just it!

This app doesn’t remove Carrier IQ from your device. The reason is, the Carrier IQ software is silently integrated into your phone firmware, and you’ll need to get some special privileges before you can remove it.

However, removing this application software from your phone can prove a lot of danger to the phone, one, it can make the phone become vulnerable to virus and malware attacks while making it hard for the device to receive firmware updates in nearby future to come. And if you want to remove the application from your phone, you should search online for some guides to help you do just that.