Love Facebook? Well, who doesn’t. The huge popularity of Facebook has made me and everyone to change this question to ‘Are you Addicted to Facebook?’ Thumbs up! if the answer is still yes. If you mostly use the Facebook on your Android or iOS device, then here is a good news for you. Facebook Photo Sync is now available for Android and iOS. You might be familiar that recently, Facebook stated that it will be releasing a new useful feature for its Android and iOS app. So here it is. The new Facebook app for these two popular mobile OS comes with Photo Sync feature.

What is Photo Sync ?

Well, as you know, a huge audience on Facebook uses it just because of image sharing purpose and Facebook knows this as well. Photo Sync feature is to automatically share the pictures that you take with your Android or iOS device. So you need not to follow the multiple steps like taking the first picture, opening Facebook and then uploading the pics. Do it with ease now. Let it to happen automatically. The photo syncing with your Facebook account is done using WiFi or your mobile Internet. The choice regarding this is all yours. 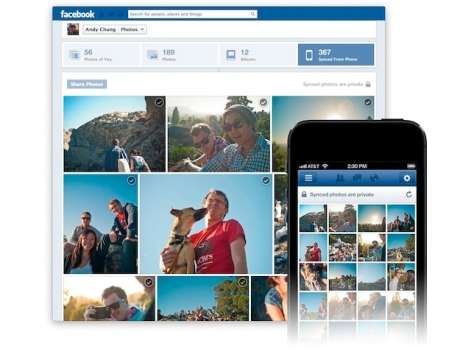 Plus Points in Photo Sync

OK, the automatic photo uploading to Facebook account, as soon as one clicks the pics using one’s Android or iOS device, sounds cool. Well, you might be thinking that what if some pics are not good for sharing with others or you don’t want any particular picture to get shared in your Facebook account. Don’t worry, Photo Sync will upload the pictures in a new album with its privacy status set as ‘Private’. So the photos that you click with your Android or iOS device are just upload on Facebook, not shared. The sharing task is up to you and you are free to share all or selected photos, that Photo Sync uploaded.

Worried about over use of your Internet data? On its support site, Facebook stated that photos that will be uploaded as smaller size of the size 100 KB or so. The images may be of larger size, when uploaded via WiFi network. So nothing to worry about your Internet data. Photo Sync is smart enough and takes care of everything itself. Moreover, it will not sync photos, if your device’s battery is low. Another smart move! Isn’t it?

The photos synced so, can be accessed from PC as well. For this, while running Facebook on your PC browser, just click on the option ‘Synced from Phone’ , that you can find on the upper right corner.

This new feature is just awesome and to make it even better, 2GB  space is offered by Facebook to all users. So it’s a win win situation.

This new feature may be rolled out by Facebook to compete and sweep out the Google+ Instant Uploads. Well, whatever is, this is indeed an awesome feature for people who use Facebook on Android and iOS devices.

You can enjoy this feature by installing the latest FB app. But the bad point here is that it’s supported over iOS 6 devices only. Facebook has stated nothing about the Android OS versions, so it seems that all Android devices are eligible for this new feature.

Just think about the situation, when you are on travel or any party/event. Now you just need to take the pictures and they will get uploaded to your FB account automatically. You just need to review and select the ones, that you want to share. That’s it!

So do try this feature yourself and spread the word about your experience, via the comment section below.

Social Media Misconceptions That May Harm Your Business