Facebook, according to PCMag, has scheduled a fancy invitation-only event that would be held in San Francisco next Wednesday (SOPA Blackout Day as said by Reddit, and some other websites). But the company has not yet released any details of how the event is going to be held, what it is going to held talks on and others. 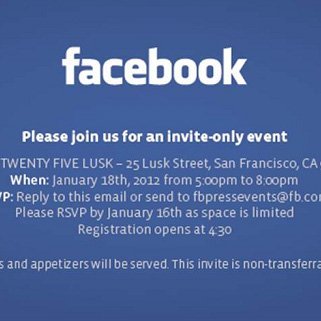 Facebook will be using its time at a restaurant known as 25 Lusk to make its big announcement over the SOPA and PIPA bill. According to PCMag’s Danny, he said that the company could even offer an extended preview or a more constructed timeline for news we all already know about.

We’ve already seen a bit of dabbling in Actions since the feature’s announcement at the F8 conference last September. These have mainly consisted of just the “read,” “listen,” and “watch” actions that accompany user interactions like “Listened to a song on Spotify” or “Read an article” on papers like The Guardian or the Washington Post. Key to Facebook’s strategy is action automation, or the seamless posting of these updates whenever a user performs a function within a Facebook-friendly application or site.

And, we should note, Facebook just recently bolstered the “listen” action with a new “Listen With” feature – an action (not a “Facebook Action” per se) that allows users of the same music service to listen to the exact same song at the exact same time. Should they desire to chat about the lyrical brilliance of their shared tune, a Facebook chat window pops up and allows them to toss comments back and forth. PCMag writer David Murphy said.

But what should we be expecting at the event? That is the untold story we need Facebook and Zuckerberg team to tell us at the Wednesday’s Appertinzers event.

Please share your mind over this article and what you think about the SOPA and PIPA bill – SOPA stands for STOP ONLINE PIRACY ACT while PIPA stands for PROTECT IP ACT.

Will this be the future o...

One of the biggest and m...
Read more
Load more