In its event in New York, after the Lumia 920, Nokia has announced another product tagged the Lumia 820 whose screen is smaller than its Lumia 920 predecessor. The Nokia Lumia 820 promises to offers a solid smartphone experience to users. With an AMOLED display of WVGA resolution that does not carry an HD factor; the Nokia Lumia 820 is built with a 4.3″ and features the ClearBlack technology. 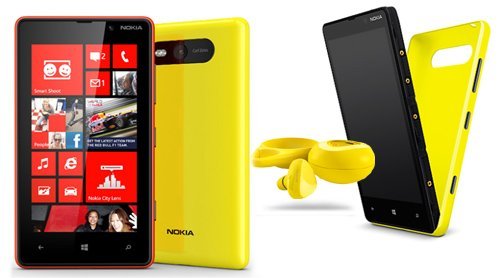 The internal storage features on the Nokia Lumia 820 is 8GB extendable to 32 GB with a microSD card supported by a 1 GB RAM, also package is a 7GB SkyDrive cloud storage.

A rear facing primary camera of 8 MP with 3264 x 2448 pixels resolution is a package on the Nokia Lumia 820 and the camera carries some features such as; Geo-tagging, auto-focus, Tessar lens, LED flash, video recording at 1080p@30fps, it also has a secondary camera for video calling. The Operating System that powers the Nokia Lumia 820 is Microsoft Windows Phone 8 with a chipset is a Qualcomm MSM8960 Snapdragon that has CPU Dual-core 1.5 GHz Krait Processor. It is also packed with GPU Adreno 225 with a wide range of sensors such as Accelerometer, compass and proximity.