The top Video games of 2012: “Dishonored” got the first on list 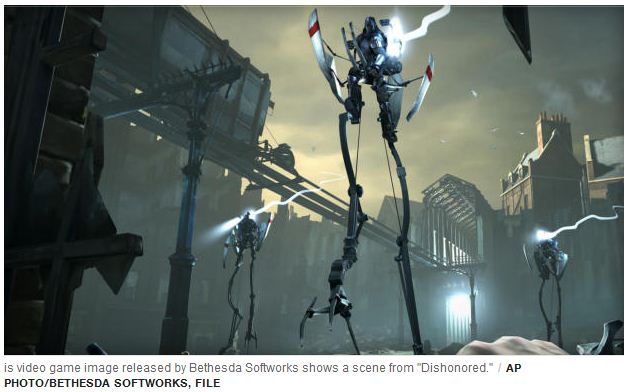 The year 2012 is gradually wrapping up and many companies are already wrapping up to give account of the year’s sales, profits and progress. The internet activities is never an exemption of this, Google recently released the top searches made on its search engine in 2012, I wrote about it on techatlast.com. This time around, it is time to check out the top video games of 2012, game addicts will be able to see which game the world gamers played the most.

This game is a Bethseda Softworks for the PlayStation 3, Xbox 360, and the PC. The game is from Arkane Studios, a drama of revenge packed with a witty plot, a wonderful and spectacular game play, sets to lose a gifted assassin in a glorious decade city, influenced by steampunk. It became the first on the list of the top video games of 2012.

This game went to the second position of the top video games of 2012, an Electronic Arts for the Playstation 3, Xbox 360, PC and Wii U. Made by BioWare, the last stage is a little Bumpy, a fearless Commander Shepherd’s final journey into cosmos.

A Telltale Games, for the PC, Playstation 3 Xbox 360 and iOS, it is a Robert Kirkman’s comics. A predictable bloodbath of zombie, it is committed to protecting an 8 year old girl Clementine. This game made it to the list of the top video games of 2012.

From thatgamecompany, for the Playstation 3. The figure has no name; it trudges across a desert to a glowing light. The visual is gorgeous, but it is simple in nature, haunting after music, and has to communicate without word, with whoever he meet on the way. The experience came out outstanding as one of the top video games of 2012.

A 2K Games for PC, Playstation 3 and the Xbox 360, made by Gearbox software, it’s a combination of first person shooting, loot collection and role playing, here you will come across Pandora citizens, a damaged godforsaken planet. The fifth on the list of the top video games of 2012

Also a 2K Games, available on PC, Playstation 3 and Xbox 360, It is about a challenging return, after the Earth forces fight back against the invasion of extraterrestials. A battle of wits instead of reflexes came into the top video games of 2012.

A Plytron game available on Xbox 360, Gomez is the character, two dimensional, who unexpetedly found out that his world has burst into the third dimension for the developer Phil Fish. The adventure of Gomez goes deeply and dedicated player needs to solve it in one of these top video games of 2012.

Also a 2K Games, available on Xbox 360, Playstation 3, and PC. This game is made by German Studio, the transplant of Yager Development. To war-torn Dubai “Apocalypse Now”. Its a bracing critique, for rarah jingoism of contemporary military shooters. This one of the top video games of 2012, is not just about war.

A Ubisoft game avialable on Xox 360, PC, Wii U, and Playstation 3. An old centuries conspiracy which took place in the Colonial America.

An Ubisoft game available on Wii U, It’s the best game on Nintendo; the game is all about finding and hunting down the dead. One of the top video games of 2012.

Some other games, that are in the category of one of the top video games of 2012, but are runners up includes; Darksiders II, Call of Duty, Dust: An Elysian Tail, Black Ops, Need for Speed: Most Wanted, Halo 4, Far Cry 3, The Unfinished Swan, Paper Mario: Sticker Star, Papo & Yo, Mark of Ninja and more.

Which of these games interests you the most, and which one made your 2012 more fun on the Pad or joystick?