The 7 Weirdest Hybrid Gadgets of All Time 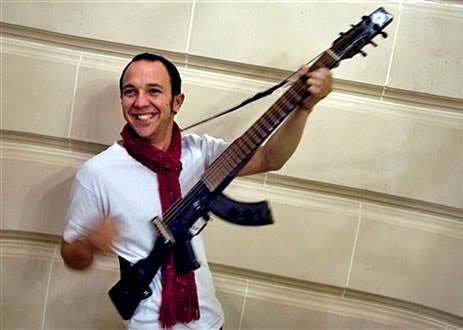 Probably one of the coolest hybrid gadgets we’ve ever seen in movies is Maxwell Smart’s Swiss Army Knife, which holds a flamethrower, blowgun, chisel, and a crossbow that shoots a mini harpoon. It’s right up there with Nigel Powers’ Mini Cooper, which can turn into a submarine and Al Czervik’s golf bag from Caddyshack that’s “loaded with a remote-controlled club-ejector, built-in stereo, and more.” Of course, while reel hybrid gadgets are cool and all, they’re no match for real life hybrid devices like the ones described below.

What do you do when you see a soldier holding a gun like a guitar? Well, if you’re César López, you create an escopetarra, a guitar made from a modified gun to make a statement about peace. You see, López is a Colombian peace activist and he wanted to say that it’s better to make music and not violence.  The first escopetarra was born in 2003, made from a Winchester rifle and a Stratocaster electric guitar.

Honestly, we can’t remember anyone who bought an N-Gage when it was released in 2003. Maybe because everyone we know had a Game Boy Advance or at least wanted one, which could be the reason for its lack of popularity among our circle of friends. It seems that this gadget “meant as much for play as it was for communications” was just not everyone’s cup of tea, though, only selling 5,000 decks in the US and 800 in the U.K.

There’s this scene in Sweet November, where Charlize Theron’s character uses a Flowbee to cut her hair. Now, just in case you’re not familiar with the Flowbee, it’s actually “an electrically powered vacuum cleaner attachment made for cutting hair.” It was invented by Rick Hunt, a San Diego carpenter, in 1988. To use this nifty device, you don’t need to buy a special vacuum, just use your “standard home vacuum to deliver a neat and efficient home haircut solution.”

Don’t get us wrong. We love our iPod as much as the next guy; but we also can’t leave the house without our ever-reliable Taser. It’s a good thing, then, that Taser “released a belt holster that can be loaded up with 1GB of MP3s.” Sure, it’s not exactly as posh as our iPod but it’s not like the latter can prevent us from being mugged—so there’s always that to consider. Oh, and did we tell you that the holster comes in leopard print? That’s double the fierce, if you ask us.

We don’t do a lot of note taking, but we can see ourselves buying the Livescribe if, for some reason, we are tasked to take notes by hand. Simply put, it’s a pen that can record audio as you write notes and it can synchronize said audio recordings with what you’ve written down so far. It can also do “relatively simple calculations, such as mathematical operations and language translations.” 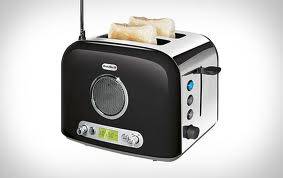 Breakfast plus morning news? Well, why not? Created by Hammacher Schlemmer, the Radio Toaster is described as “the only toaster to combine fully customizable toasting options with a built-in FM radio for convenient news, traffic, or music as you prepare breakfast.” Now, we don’t know about you, but we’re pretty sold on this gadget, considering it has Bagel and Thaw as toasting settings, and an adjustable antenna for the radio.

The author juggles being a wife to an engineer and a mother to a witty toddler. In her spare time, she involves herself in getting the word out about office phone systems. Find Monique on Google+.