Twitter in its bid to catch up with its social media rivals such as Facebook and Google+ has introduced branded pages for business accounts on its platform. Twitter announced this on Thursday about its plan to launch a facebook-like style branded pages for twitter accounts. 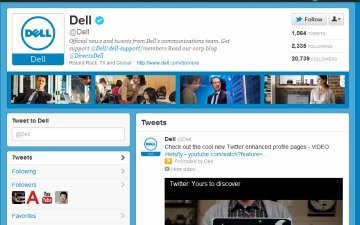 The new launch will now make it easier for people having account on Twitter to create a brand pages for their business and personal information. The page is like that of Facebook in look but this twitter’s version is totally different from others. Just like Google+ that has launch partners for its pages, Twitter as well has some partners that supports the launch of this brand pages and few of them are Hewlett-Packard, Staples, Verizon Wireless, Coca-Cola, Chevrolet, Nike, PepsiCo, Best Buy, Dell, Disney, Intel, JetBlue, American Express, Bing, General Electric, Kia, McDonald’s, NYSE Euronext, Heineken, Subway and Paramount Pictures, mainly for the release of the Mission: Impossible — Ghost Protocol.

According what Advertising Age said in its report, brand pages like that will let advertisers to customize their own thing with their banners and headers to make their tagline and logo become popular.

A personal Twitter’s Ads Blog also take notes of it that brand pages can “help control the exact message visitors will see when they first come to your profile page by promoting a tweet to the top of your page’s timeline.” It says that the idea of brand pages is to highlight the best content among your contents to your visitors. Now, the Promoted Tweet on any of the marketer’s profile page on Twitter will now appear auto-expanded which will let visitors easily and instantly see the photo or the video content linked from a tweet. Also, the new design will also allow brands to separate their @replies and @mentions with ease.

Twitter’s integration of branded pages started back then in April when a rumored article circulated the internet about this reason immediately when Google started its branded pages, known as Google+, and now, it is no more rumor as the social media giant made it happens seven months later.
Watch the Videos below on how the new Twitter Looks and some other things