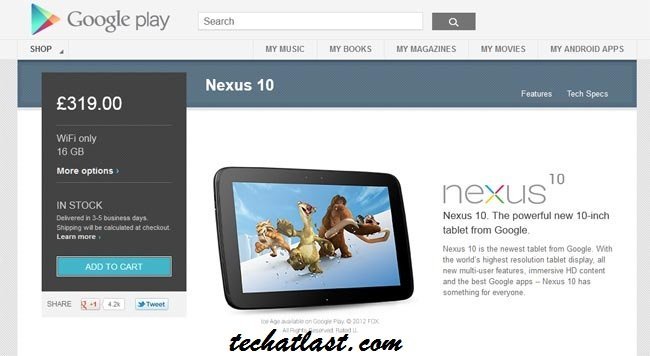 It is only the 16GB Nexus 10 that is currently available in the Google Play UK store because its 32GB version has already been sold out, and there are no sign of when it is going to be available for sale in the store.

If you are still new to this awesome Google device, please refer to its full nexus 10 review here to know what you are going to get when you make your order. Please note that it costs £319.00 as at this moment which is approximately $518.47. The tablet is cool because its price is moderate compared to Apple iPad. I ordered for an Apple iPad few months back and comparing the price with this Nexus tablet 10, I think Google Nexus 10 beats Apple iPad here in my own opinion. 🙂

The Google Nexus 10 comes with a  10.055 inch advance display feature at a resolution of 2560 x 1600 pixels and 300 pixels display per inch. It features A15 dual-core processor and also comes with a Mali T604 GPU along with Google Android 4.2 Jelly Bean mobile OS.

The 16gb Google Nexus 10 is released with a higher quality camera functions; it comes with a 1.9 MP (mega pixel) power shot camera at the rear side along with 5 mega-pixel camera in front that can be used for video chat along with a rear-facing 5 mega pixel camera which is good for taking photos and video recording.

The Google nexus 10 comes with good storage options. It is embedded with an in-built 2GB RAM for processing data along with a 16BG storage space for movies, photos and other media files.

So many other features are embedded in the device. You should take a chance and get yours now!