Google Chromecast Vs. Apple TV: My Unbiased Comparison of the two

If you’re looking for a TV streaming device that will serve your need, you have quite a little options to choose from; ranging from game consoles to set-top-boxes. But the new entrant, Google’s chromecast could be ideal for anyone hoping to pay low for better value. We know its cheap at a mere $35 USD, but it has all it takes to rival Apple’s third-generation, Apple TV.

Why am I comparing them?

Google Chromecast and the Apple TV comparison would sounds great to a prospective buyer? I guess you guys would love reading a simple comparison-cum-review of these great TV gadgets and that’s why I’ll be writing them line by line for your understanding.

In my opinion, the new Google chromecast comes with a whole lot of advanced features which makes it superior in one or two ways to the Apple TV, but that doesn’t mean Apple TV lacks high-end features as well. The two gadgets are introduced into the market at a very different time, and they were meant to appeal to the same kind of customers but the technology used in making them seems different. So, let me analyze some of these technologies so you can see which is superior to the other as we move a step further to a 21st century or next-gen living room.

Seeing from the image above, you can see that the new Chromecast beats Apple TV hands down; from its length to breadth, we know the leader is in this regard.

And seeing clearly, there are two highly different devices; one comes in Sparkplug form, while the second in form of an hockey puck.

To take advantage of the Apple TV, you have to put it somewhere around or under your TV, while the Chromecast makes life much more easier because it connects directly to an open HDMI port. I love this a lot!

Although, you don’t have to hold both device all around as the case may be with a smartphone, you won’t care much of how heavy each may be, but surprisingly, Apple TV is much heavier compared to Chromecast.

Chromecast has built-in HDMI plug (although, male one), while Apple TV lack this feature, and you will still have to buy additional HDMI cable to connect your TV, Google makes its gadget interesting here!

Both devices requires power source: Chromecast derives its power from USB port (either from a wall charger or through USB port on your TV), and Apple TV through a separate cable (Apple makes you purchase this separately).

Both devices comes with a maximum output, which means you can watch all your media content in full HD (1080p). Thanks to latest technology advancement for this! 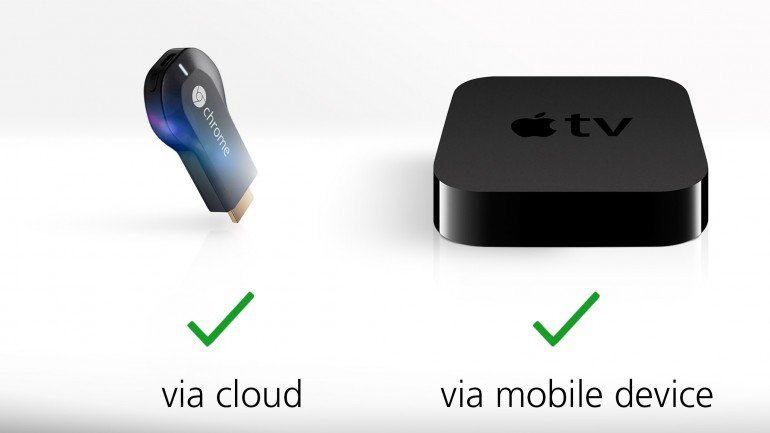 No superiority here because both devices comes with feature that let you sling content directly from supported apps on your smartphone to the big screen. But they sling content in different ways.

To share content from Apple TV, you’ll use iOS to Apple TV slinging, where the content is served from your mobile phone and the output is thereafter shown on the screen for everyone. On the other hand, Chromecast slings content directly from the cloud while you can use your smartphone or tablet as remote controller or trigger for next action.

And remember that Apple TV lets you mirror anything that’s on your iOS device’s screen but Chromecast only let you mirror chrome web browsing, while lacking in mirroring from iPhone and android smartphones.

As you all know, Apple has a kind of monopoly that makes it uneasy for outsiders to benefit from their services, so also is the case here. Apple TV has been designed in such a way that makes it easier to communicate within Apple ecosystem. You can’t stream from Windows, Android, or any other unsupported platform unless your system has been hacked to do that.

Chromecast raised a lot of eyebrows with lots of features. By default, it slings from android devices, and unlike Apple TV, you can use your iPad or other iOS devices with!

But Windows phone and Blackberry devices aren’t included. Sorry Microsoft and BB guys out there!

When it comes to app availability on both devices, Apple TV rocks here, owing to the fact that Chromecast is a new comer compared to Apple TV.

With Chromecast, you can sling from Youtube, Netflix, Google Play Music, and Google Play TV & Movies. And if you are browsing through chrome browser on your PC, you can easily install an extension that lets you mirror content from the browser to your TV screen hassle-free!

Although, the kind of quality rendered isn’t as good as streaming directly from a mobile device, but it worth the hassle at 720p — but, if you’re to consider the kind of quality that someone would get from using some of the high-end mobile phones like those compared at mobilephones.org.uk, you’ll agree that it worth the price at $35 than paying high for almost the same quality.

CPU capability is very important in knowing how far a computer can go in term of performance and how long it can last, and to sum it up, these two devices has single-core processors, and they are enough to handle 1080p video and audio streaming from the cloud.

Same thing happened here, as each devices comes with a 512 MB of RAM (Random Access Memory). I think one is copying the other here 🙂

This doesn’t mean anything much because you don’t have to a whole lot of media files on the device, its only there for caching purposes. You have the cloud all to yourself as the storage space for all media content, while the device takes hold of them for a shorter time.

Neither of the two can allow you to add your own media content such as video or audio files. But Apple TV can play such content if you go through the back-door by transferring the files to your iOS or Mac, and then AirPlay it from the device to Apple TV.

Rumour has it that Chromecast runs ChromeOS, but I’m not certain of this. However, Chromecast is more of Android or Google TV than how it is to ChromeOS. But if you have plan to do some hack, that’s okay.

Apple TV according to Gizmag, is a modified version of Apple iOS. So, don’t expect much or less than iOS.

Know thy selling point and thou shalt sell much…more!

That’s Chromecast for you. At $35 you can watch video from Youtube, Netflix, and access music and videos from Google Play with ease. And you can as well transmit content from your web browser on a PC with ease without paying extra hard.

Also remember that you’d be required to purchase an extra HDMI cable before you can connect the device to the screen on Apple TV purchase. And that’s extra after $100 payment.

Google Chromecast has lots of features that you’ll hardly see in Apple TV, and also, Apple TV rocks in its own areas. Moreover, Google chromecast at the launch has limited list of supported apps unlike , but you’re free to make your choice.

Judging from the pricing, storage ability, connectivity features and many others mentioned above, which do you intend to buy, Apple TV or Chromecast?