The Average Number of Screens in a Home Has Increased

Twenty, 30 or 40 years ago, when people discussed “screens” in a home, they were talking solely about televisions. While television remains an intricate part of the “viewing” experience for many people, the way we consume information has changed dramatically. Technology, changing wants, and an advent of new services have completely revolutionized how people watch television, movies, the news, and absorb the information they want and need.

How Do People Get Information?

According to a recent Google report, 90% of all media consumption is done via a screen, whether it is a television, a tablet, a smartphone, a desktop computer or a notebook. 38% of that media is consumed via a smartphone. 90% of people are also using multiple devices to conclude a single activity. For example, people may start searching for information via their smartphone, then they quickly move over to a laptop or tablet to finish the research. They may begin using a tablet to find television programming, then switch over to a traditional television to actually view the content. The same research study also found that a significant amount of viewing is done on a device other than a television, or people are using devices while they are “watching” TV. 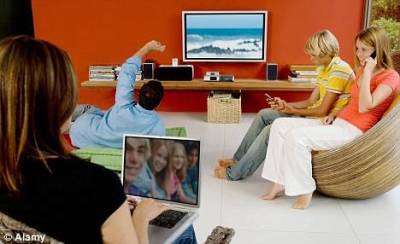 So, what does all of that mean?

Simply put, it means that people are no longer satisfied with having a single screen as their viewing medium. Think about it; when you sit down and turn on the TV, you likely have your phone nearby. Whether you are texting, checking e-mails, or browsing the social media, your sole attention is not on the television. People have become expert “multi-viewers”, and in many cases, because of internet on the go, television has simply become a background, white noise device in many homes.

That means that the number of screens a person now has in their home has risen exponentially in recent years, just as the number of televisions in one’s home rose year after year. Better pricing, better technology, and a comfort level with the technology, leads to more people use what is available to them.

ALSO READ: The New Technology in House Alarms Which Keeps You Safe

The Average Number of Screens in a House

Most households now have between 5 and 10 screens in the home, those numbers include tablets, PCs, notebooks, smartphones and televisions. These devices include any screen that enables users to watch content, or read content. HDTVs are counted in the mix, however, traditional televisions, without internet capabilities are largely discounted in most studies.

The number of “screens” in a home, largely depends on the number of people living in the home, and the age of those people, as well. If your household, for example, has two adults and two teenagers, it is likely that you have more screens within the home, than a house that includes two adults or those with younger children.

The number of screens in a home, also speaks vividly to how much time is spent viewing content and looking at a screen, whether for pleasure or business. According to recent studies, the average American now spends upwards of eight hours per day, every day, looking at a screen of some sort. The number of hours using a screen are higher than that for a minority of the population, particularly those who have computers at work, as well as at home for pleasure.

Reports suggest that some people may be spending upwards of 12 hours a day looking at a screen of some sort.

ALSO READ: General iPad maintenance: How my iPad screen got broken, and the hell I went through before getting it fixed.

What Does it All Mean?

Simply put, the general public’s dependence on screens to garner information is growing very fast, but that isn’t necessarily a bad thing. The internet, and more generally technology, has made it easier, in a lot of ways, to exist. While some may bemoan the way the internet has changed communication and entertainment, there are many positives to those changes that must be explored.