Guess Moto E was made for African consumers 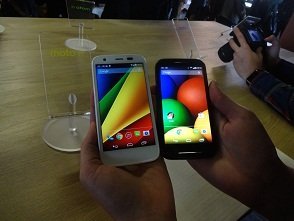 Moto E is cheap, but it looks fancier than most high-priced smartphones out there

Buying high end phones lately has never been easier if we look way-back to how it was few years ago. As an African, it is not that easy to order and get smartphones of Apple’s iPhone, Samsung Galaxy series pedigree between the past 3-5 years. But being an emerging market, some of the phone manufacturers have foreseen what the future may look like in Africa – maybe they have might have envisaged scenarios where the majority would be using smartphones with an internet access on them. There’s high level of smartphone adoption in most of African states, people now see technology as part of their must-do-daily lifestyle. If we look at the recent Ghana’s smartphone adoption graph, you’ll agree with me that they over use mobile cell phone in the country with 26.09 million mobile phone users on record. That’s around 101% penetration if we should put this figure against Ghana’s population at 25.37 million.

Back to business, with this eye-opening figure, I don’t think you should count Africa out of mobile phone market movers list. You won’t dare, neither would Apple or Samsung!

Right now, you can order for any smartphone of your choice – ranging from Apple powered iPhone to various other branded smartphones – from the nearest mobile shop close to your home, but at a price!

These phones are available for sale, even at a discount, but the price you will have to pay may seem unreasonable, owing to the exchange rate and nature of currency flow in your country to the standard US dollar or British pounds.

ALSO READ: 4 Hottest Korean Technology Trends You Should Know About

I could remember when I bought my first Apple iPad two years ago, through the help of my cousin who stays in the United Kingdom, I paid heavily for the item before I could lay my hands on it right here in Nigeria. It was close to 500 quids (500 Great Britain Pounds) that I paid for the tablet directly from Apple store. The amount was too much if it was to be converted Naira, which is Nigerian currency. In fact, you can own a plot of land in Nigeria with the same amount I paid for the tablet – excluding shipping fee – all these due to irregularities in currency exchange between the two countries.

And I’m sure there are countless numbers of wanna-be-high-end-smartphone consumers out there who are having similar challenge.

ALSO READ: Why Now Might be the Worst Time Ever to Buy a Smartphone

In wake of that, mobile service providers came up with features that let phone freak buy latest smartphones at a bargain – you get it cheap and stay long with them as customer – which is well referred to as contracts. But this hasn’t been functioning well in Africa, unlike how it is well-refereed in the UK, US and Canada.

But you know, not everyone will even like to stay indebted to a service provider for that long period of agreement – at least we all seek freedom! Maybe that’s why the new Motorola’s Moto E was launched for consumers in the developing countries of the world. They won’t have to run into a debt before having the luxury of using high-end phones.

For as low as $129, you can become a proud owner of powerful, yet stunningly looking android smartphone with state of the art graphic display. Moto E has a 4.3 inch 960×540 pixel display at 256 pixels per inch. And if you compare Moto E with iPhone 5C – which goes for $549, without contract, has a slightly smaller screen but to a moderate extent sharper with 1136×640 pixel resolution at 326 ppi. And even if the subsidized version of iPhone 5C should go for $99, adding few dollars to it will land you a brand new Moto E with no-obligation to your carrier.

Moto E is gifted with 1GB RAM along with a powerful processor; duo-core Qualcomm Snapdragon 200 processor, and it has no front-facing camera, which is a NO-NO for geeky guys out there. But it has a 5MP rear-facing camera with 4 GB storage capacity. This feature reduces its chance of approval too, but they have included a microSD slot that allows you to increase it to 32 GB of extra storage.

It is a 3G powered smartphone (it will probably make a lot of sense to consumers in Africa, because 3G is almost everywhere in some major cities of the continent), running the latest Android Kit Kat operating system with little to no mix of the common android skin on it – this  would enable users to enjoy same feel of Google android’s interface if they swift from other android phone. And Motorola has boosted itself claiming that Moto E’s 1980 milliamp hour (MaH) battery can power the phone for a whole day, not minding the number of processes it runs. That’s pretty good for some guys that loves playing games on their smartphone.

But above all, Moto E is a legend of high-end smartphones that costs less to use without obligation to your service provider.

What do you think about E against its competitors like iPhones and Galaxies? Do you think Moto E is probably the phone africans have been waiting for?