Digital Certificate which is also called as Digital ID, is one of the credential which is used to provide identification over internet. In other words, you can say it’s similar to driving license, national or international passport. It gives an information about the identity of the particular entity or any information related to it. It comes with digital documents, which helps in serving the identification. It is issued by the trusted CAs (Certificate Authorities,) who also provide the validity of the certificate which are issued by them, which in return work as a proof that the person or any entity to whom the certificate is issued is not fake and they are what they say are. For proving this, CAs applies their digital signature, which tells that the certificate is not altered and it’s original. 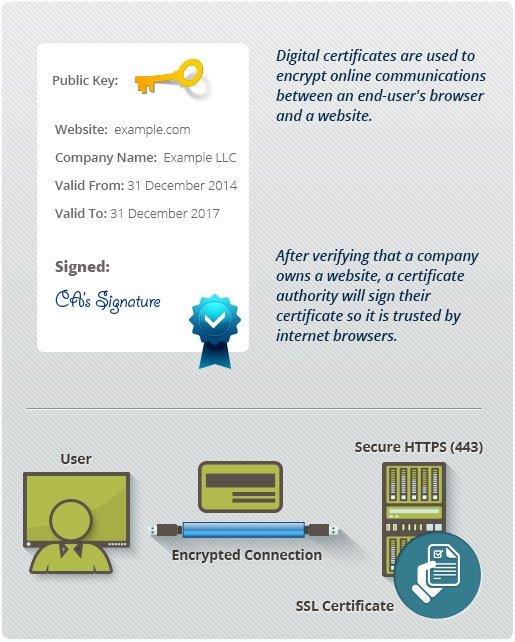 Every certificate issued by CAs are unique to identify, as they offer serial number, holder’s name, how long the certificate is valid (expiration date), public key of the owner of the certificate which is used during the process of encryption & authentication, lastly signature of the CAs who has issued the certificate.

Sometimes, digital certificates are also referred to as code signing certificate which helps users to identify that the signed software is by authorized person.

The content of Digital Certificate is in text format which is visible to everyone, as it does not contain any confidential information which should be remain private. Due to this, visitors of the website are able to decide whether they can trust the certificate holder and certificate provider or not.

Preview of contents you can find embedded into Digital Certificates.

Though it provides content which are not encrypted, but that also mean that it isn’t quite possible to make any change to the provided information. CAs uses two keys; Private and Public key. Private Key remains only with the holder of the certificate, which is used to sign the digital certificate whereas Public Key is used in order to do the verification of the digital signature.

An Architecture of Digital Certificate:

Certain information regarding user, computer or services are kept in public key, which is provided as the information regarding the subject of the certificate like, services, and applications which can be used by certificate. As per the certain standards of Public-Key Infrastructure (X.509) Working Group (PKIX) of IETF (Internet Engineering Tasks Force), these are some of the objectives which is mandatory to be met with the certificates that are issued for Windows Server 2003 or earlier PKIs.

X.509 version 3 certificate is the latest format of the certificate which is used in a Windows Server 2003 PKI. Below is the figure of the same.

Here are the fields that are supported by X.509 version 3 certificate.

Subject: It is also referred through the use of X.500 or LDAP format (Lightweight Directory Access Protocol.) It provides certain information like computer name, user information, network device, services which are issued by CA for the certificate.

Serial Number: It’s used for the unique identification of every certificate that’s issued by CAs.

Issuer: The name of the issuer is most of time referred through format of X.500 or LDAP and it offers the notable name for the CA who issues the certificate.

Valid From: The date & time from when the certificate became valid.

Valid To: The date and time, when certificate expires and can no longer be considered as valid.

Public Key: Provides the public key which is used with the certificate.

In X.509 version 3 certificates, additional extensions are provided which offers additional features and functions to certificates. Though it’s optional and it’s not necessary that it will be included in all the certificates which are issued by CAs and they are as follows:

Subject Alternative Name: More than one format can be used to make the subject. Let say, if the certificate has to be issued which must have the account name of the user in LDAP distinguished format, name, e-mail address, UPN (User Principal Name,) then it can be included in the certificate through adding the extension of subject alternative name which provides the formats for additional name.

CDP (CRL Distribution Points): Whenever any user, service or computer issues a certificate, a service or an application, is there to acknowledge that the certificate has been revoked before the expiration of its validity period. The work of CDP extension has to do the same, it offers more than one URL where the service or application are capable of getting the CRL (Certificate Revocation List.)

EKU (Enhanced Key Usage): This extension comes with an OID (Object Identifier) option for all the services and application which can be used by other applications. All OID comes with a unique number sequence from the worldwide registry.

Certificate Policies: It determines the rules and regulations which has to be followed by the organization to get the validation of the certificate request or before a certificate get issued. For the process of validation, OID is used which can also include URL which is policy-qualified, which fully describes what measures had to be taken in order to validate the identity.

Certificate templates are used by CAs of Windows 2000 & Windows Server 2003 Enterprise. It is stored under the services directory named Active Directory. It offers default attributes to certificate, which includes authorized uses of the certificate, cryptographic algorithms that are used along with certificate, length of public key, format of the subject, requirements of issuance.

To note, BrattRootNameDN is the LDAP distinguished name of the forest root domain.

By default few certificate templates are offered to new CA installation. If needed more, they had to be assigned additionally.

Single Function: As it name says, this certificate template is limited for the single function. For example, at a time it can be used for only one function for which it is assigned like for only encrypt to decrypt files.

As discussed earlier, digital certificates are one type of credentials and like other credentials such as passport or driver license, this also has to be created before making any use of it. Once it’s created, there has to be a valid reason to validate the authenticity of that certificate and verification is also needed to know its usage purpose. Once these certificates are created and validated, it can be used for some of the below basic cryptographic functions

Below steps shows the procedure for requesting and issuing the digital certificate.

1. Pair of Keys: The applicant is provided with the private and public by any authority or any valid organization.

2. Collecting Mandatory Information: Applicants have to provide all the necessary documents asked by the CA for issuing digital certificate. The information are like applicant’s e-mail address, fingerprints, birth certificate and some other documents asked during the identity verification process.

3. Requesting for Certificate: In order to get the certificate, request has to be send for the issuance of the certificate with all the required documents. It can be sent through email or postal & courier is also allowed. Request for the certificate should also be notarized.

4. Information Verification: The CA follows through their policies and guidelines in order to issue the certificate. These policies includes verification of provided information as well.

6. Sending the Certificate: After the certificate has been created, it’s sent to the applicant.

To know what the status of the certificate is, it’s categorized under three different steps which are implemented through CryptoAPI.

Storage of Certificate: In Windows XP & Windows Server 2003, certificates are stored in local computer or hardware device for which the certificate has been requested. Generally, there are two different type of certificate stores which is called as the machine store and another one is the user store. Its user store is known and referred to as “My Store,” which is used by the user who is currently logged-in. These certificate stores contains more than one certificate, which are most probably issued by different CAs as well.

Below are some of the operations of Cryptography which shows the purpose of the certificate.

1. Signature: It’s used for signing, authenticating the data or assuring that data is not duplicated.

2. Encryption: For the encryption and decryption of data.

3. Signature & Encryption: It combines both, does the authentication and digital signing of the data and encryption & decryption as well.

Public Key Encryption: Different keys are used for encryption and decryption of the information, when it comes to public key encryption. Among the keys, first one is a private key (only known to the holder of the certificate,) whereas the public key can be shared among others. Both the keys are different but are dependent to each other. The information which is encrypted through public key can only be decrypted using the matching private key which is with the holder of the certificate. 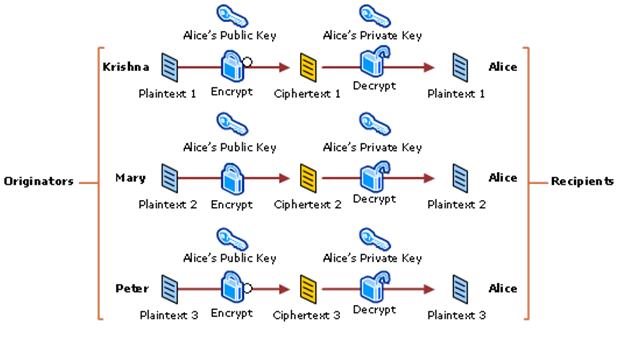 Public key encryption is quite popular for offering strong security over internet. It is mostly used for the below functions:

Message Digest Functions: Message digest function which is also called as hash functions, are mostly used in combination with asymmetric keys to provide an extra layer of security to public key encryption. They are mostly in 128 to 160 bits length and offers unique digital identifier for all the files and documents. It contains two copies of the file which have the same message digest, but among them even if the slight change happens to document, the whole message digest will change.

Mostly, message digests are used in combination with public key to make digital signatures, which are used during the process of authentication & integrity of the online data and files. 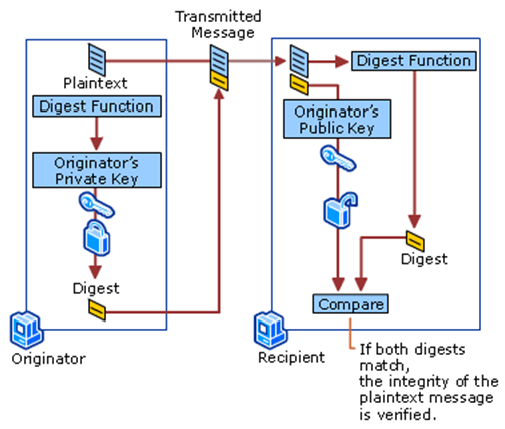 As the message digest is signed digitally along with the private key of the sender, it’s not possible for any intruder to alter or play any mischief with the message.

Here are few of the reasons which clears that it’s not necessary to encrypt all data to offer digital signature.

Algorithms are very efficient which are used to create digital signatures. These days message digest with the private key of the owner, is widely used for creating digital signatures. The advantage of creating digital signature this way is that the signature will be shorter compared to the actual data which needs to be signed, as only message digest is signed in the whole process. The advantage we get is that due to this, load is low on computer during the data signing process, which will not lead to huge consumption of bandwidth and finally the cipher text which is produced will be not be big enough which can become helpful during any attacks like cryptanalysis.

The SSL Store™, is one of the biggest reseller who is Platinum Partners with the world’s most recognized CAs (Certification Authorities), which includes Symantec, GeoTrust, Thawte, RapidSSL, Certum and Comodo. If you are looking for digital certificate, we can help you get your own SSL/TLS certificate. The Digital certificates offered by us are exactly the one which are sold by the Certificate Authority. Benefit of purchasing from us is that you will get in the price range, you can afford easily. As we purchase in bulk quantity, you will be able to enjoy the discounts we offer. We also offer one of the best technical support to solve any of your query. We have the team of experienced web security specialists, which will guide you to getting your digital certificate.

With all the information we’ve been able to provide about Digital certificates, the technology behind it, its structure, its processes and the different interactions that takes place during encryption, do you think we’re a bit behind? Let’s talk below.